This Whiteline bushing insert kit is designed to improve shift engagement during dynamic loads. A simple yet effective elastomer bushing that inserts into a large "void" area of the factory MT-82 Getrag 6-spd transmission's OEM rubber mount bushing, reducing the compliance of the mushy factory mount. The factory 6-spd transmission mount has heavy voiding (large gaps of air in the bushing) that allows for excessive transmission movement. Air makes a terrible bushing material, by the way.

When this floppy stock transmission bushing is coupled with heavy cornering or throttle application, the transmission can shift laterally relative to the chassis. This can then allow the external shift linkage mechanism to misalign, causing missed or balked shifts. We've seen that this is worse under aggressive shifting and cornering loads (track driving) in our TT3 classed Mustang, shown below. 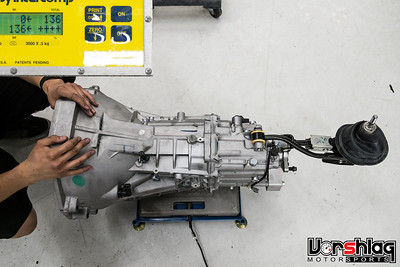 The mis-shift issue plagued us on our 6-spd S197 Mustang for two years, and the "just add an aftermarket shifter" option doesn't fix the fact that the transmission is moving relative to the remote, body-mounted shifter. At the NASA @ MSR-Houston event in January 2013, both drivers of the Vorshlag Mustang (above event) figured out quickly that we needed to shift earlier or later than we wanted in some corners to avoid trying to shift while the car was loaded laterally in a high speed corner - otherwise we would miss the upshift every time. BONK! Very frustrating. 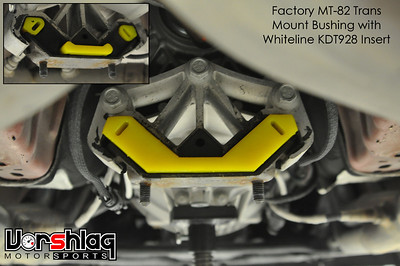 Missed 3rd gear shifts are one of the leading causes of damage to the MT-82 Getrag 6-spd, too. The Whiteline KDT928 elastomer bushing insert fills the voids in the factory bushing to reduce the transmission slop for more precise shifting when you need it most. After we installed the Whiteline shift improvement kit in our TT3 Mustang, missed shifts were a thing of the past. We still have the factory shifter, too!

After we tested one of the first prototypes for this kit in Marh of 2013, Whiteline asked us for our feedback, and if they should make this for the S197 MT-82 transmission. We gave them a big "Hell yes!" and put in a large initial stocking order, to prod them into making a production run of these. And for that we got some of the first production units (which are black and not yellow, as in these prototype pictures). This elastomer bushing insert that just pops into place and fills the air gap in the factory rubber bushing. It just flat-out works. Super easy to install (no tools, no effort!) and it firms up the transmission mounting nicely. Now installing this will add a little extra NVH (noise-vibration-harshness), just in case you are wondering, but the added shift confidence is well worth it to anyone that tracks their car, or autocrosses, drag races, or drives it spiritedly. Isn't that pretty much everyone? Yea...